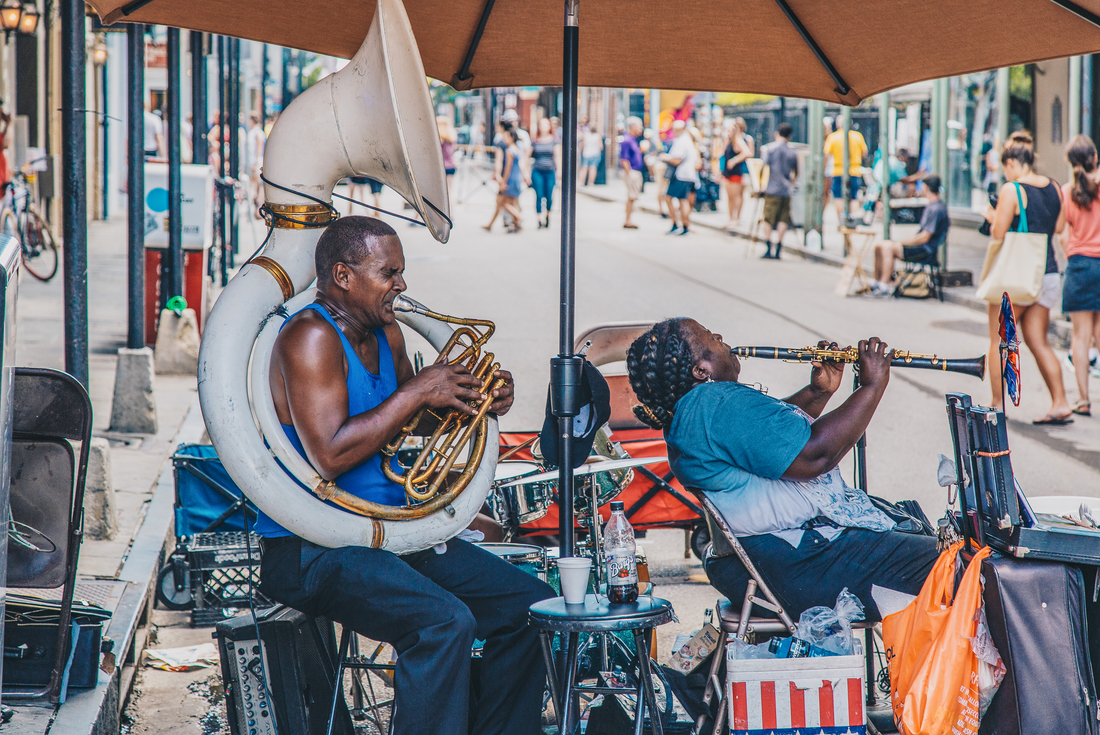 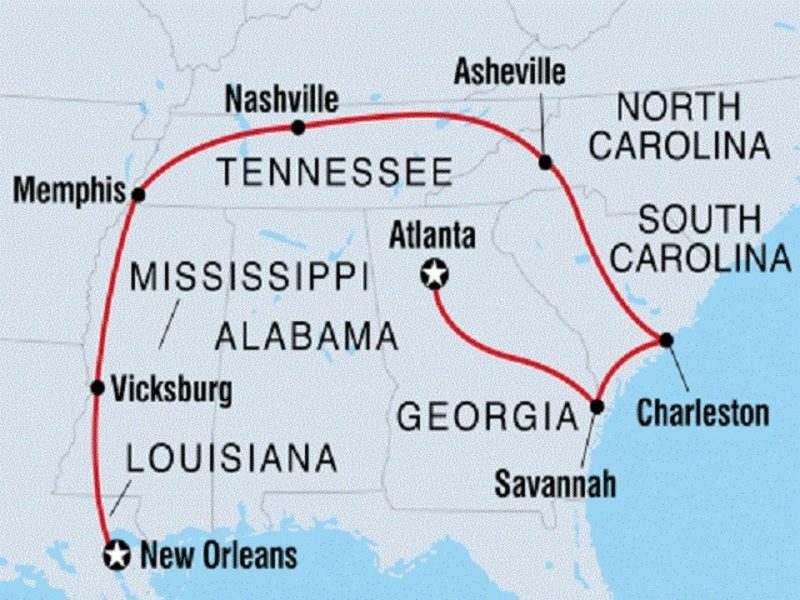 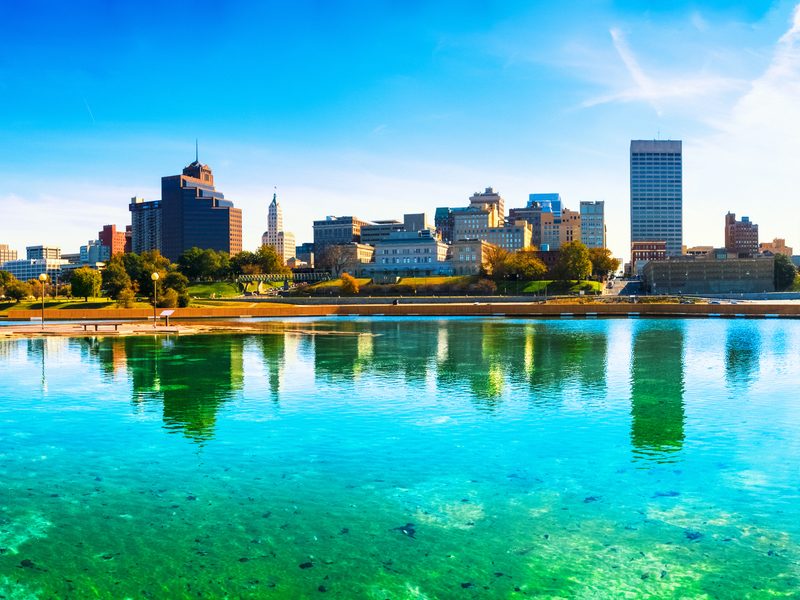 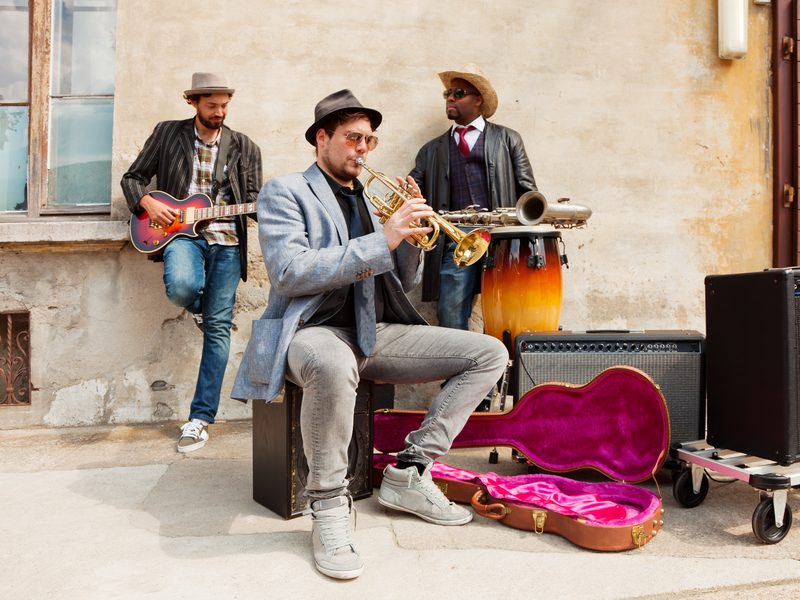 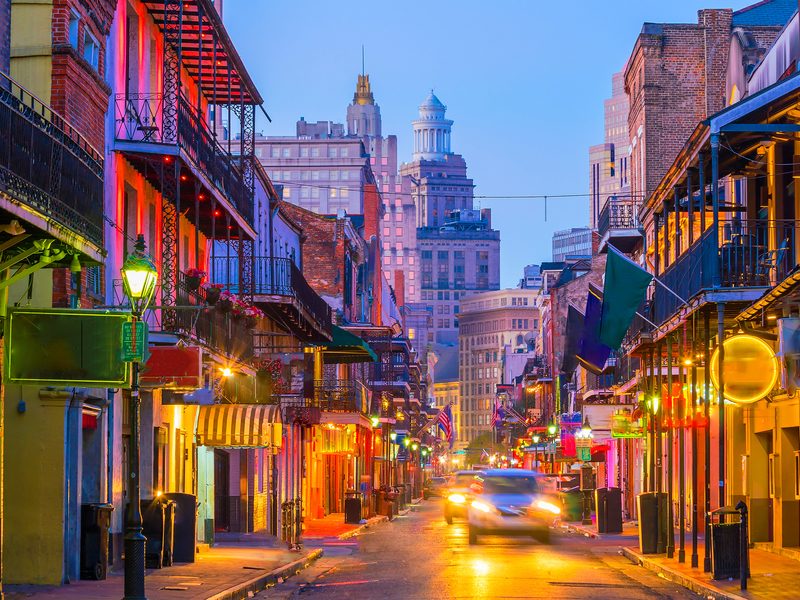 Hey y’all! Welcome to Atlanta, Georgia! An important supply route during the Civil War, the spiritual centre of the civil rights movement in the 1960s and the hometown of some of hip-hop’s biggest stars, Atlanta is the perfect introduction to the fascinating Southern USA. Your adventure begins with a welcome meeting at 6 pm today. Following the formalities, maybe get the crew together and head out in search of some hot wings or fried chicken for a taste of Atlanta flavours. If you arrive with a few hours (or days) to spare before the meeting, why not check out the Martin Luther King Jr National Historic Site. Take some time and explore the house where the civil rights leader was born, the church where he honed his oratory prowess, and the memorial site where he is buried. Atlanta is also very proud of its connection to Coca-Cola – locals have a tendency to call every kind of soft drink 'coke'. Maybe tour the World of Coca-Cola for a lesson on the world's most popular fizzy drink.

Mornin' sunshine! Hit the road bright and early and make the 5-hour journey to Savannah. In 1946, Lady Astor referred to Savannah as 'a beautiful lady with a dirty face', in reference to the crumbling, faded majesty of the city's 18th- and 19th-century mansions. Due to plenty of restoration work, Savannah's face may no longer be dirty, but she's still a city of contradictions. Take a leader-led historical walking tour to soak up the stories behind the antebellum mansions, towering oak trees and colonial buildings. Enjoy free time for the rest of the day. In the evening, perhaps head out on a ghost tour of old Savannah, then maybe seek out spirits of a different kind at one of the many local haunts.

Leave Savannah in the rear-view mirror and drive two hours to Charleston. On arrival take a brief orientation walk to get your bearings, then perhaps set out and explore the cobblestone streets that hold a complicated and often violent history. These streets were made for strolling – be sure to stop and smell the honeysuckle bushes. Perhaps let your nose lead you to a diner for lunch, where you should consider ordering a plate of soft, buttery biscuits. In the afternoon, take a tour of one of the plantation homes around Charleston. Wander around the well-maintained gardens and learn about the dark history behind the opulent facade.

Today is as clear as a Georgia sky in the summer time, so set out whenever you like and explore at your own pace. There are plenty of optional activities on offer, so take your pick and dive on in. When exploring Charleston, the history of the city cannot be ignored. In 1860, over 50 percent of the population of South Carolina were enslaved Africans, and a fantastic place to honour the reality of this dark history is the Old Slave Mart Museum. Perhaps continue to the seaside stronghold of Fort Sumter, where the first shots of the Civil War were fired. In the evening, maybe take a stroll along the Pitt Street Bridge and watch the sun set over downtown Charleston.

Head into the Blue Ridge Mountains today with a 5-hour drive to charming Asheville. Home to the country’s best breweries and some of North Carolina’s finest barbecue, Asheville also boasts an incredible folk music scene. On arrival you’ll be given an orientation tour by your leader to help you get your bearings. In the late afternoon, take a stroll through the River Arts district, a truly amazing section of the town filled with art galleries and gorgeous street art on warehouses that line the river. As night falls, consider catching an optional show at the Altamont Theatre, a historic and intimate venue with incredible acoustics and eclectic programming.

Make the scenic drive to Nashville, arriving in the country music capital after 4–5 hours. On arrival you’ll be introduced to this famous country music town with an orientation tour. Get your bearings and then enjoy a free day to explore. When the sun goes down, head to the Wildhorse Saloon to experience a real Nashville night. Every day and every evening, the Wildhorse puts on line dancing lessons and live music so newcomers and locals alike can thump the floorboards. There's also classic country fare cookin' in the kitchen – think fried pickles, wedge salads and brisket. Your cover charge is covered by us, so get shaking.

Howdy! Start your day with a visit the Country Music Hall of Fame, which contains the golden Cadillac that once belonged to Elvis. The rest of the day is all yours. Maybe check out Music Row, an area ablaze with neon signs, where more than 50 record studios and around 200 music publishing houses line the streets. Fans of classic country and blues may want to hit the Johnny Cash Museum, where the largest collection of artefacts and memorabilia related to the 'Man in Black' are on display.

Hit the road again for the 4-hour drive to Memphis, Tennessee. Time depending, the first stop on arrival will be Sun Studio, the self-identified 'Birthplace of Rock 'n' Roll'. It's a bold claim, but when artists like BB King, Johnny Cash, Howlin' Wolf, Elvis Presley and more have laid tracks in your studio it doesn't seem that far-fetched. Spend the rest of the day how you wish, soaking up the sights and sounds of Memphis. In the evening, consider heading down to check out bustling Beale Street, where traditional blues clubs and ritzier tourist traps rub shoulders. Ask your leader which bars are worth a look.

Visit the National Civil Rights Museum at the former Lorraine Motel – where Martin Luther King Jr was assassinated – for a dose of history that is both confronting and inspirational. Following that sobering look at the recent past, you can choose whether to visit Graceland. Exploding with kitschy glamour and over-the-top Southern charm, Graceland is a more than the former home of Elvis Presley and site of his tomb – it's an ode to the glitzier elements of the Deep South. Spend the rest of your day at your leisure.

Travel along the famous Highway 61 to Vicksburg, Mississippi (around 4–5 hours). Stop at Clarksdale en route, where you have the option of seeing Blues Alley, Robert Johnson's Crossroads and the Delta Blues Museum. Other possible stops, depending on group's interests, are Cleveland (for the Grammy Museum), and Dockery Farms. Arrive in Vicksburg and spend the afternoon how you wish. Famous for the siege that occurred there during the Civil War, the city is full of historical attractions. Visiting the National Military Park is one option, as are the antebellum mansions, the Mississippi River Museum, the Riverfront Murals or the Biedenharn Coca-Cola Museum, where the drink was first bottled.

Make tracks for the 'Big Easy', a 4- or 5-hour drive that might be broken up with a swamp or plantation tour along the way, time depending. After checking in to your hotel in New Orleans' French Quarter, use your free time getting to know the eclectic city. With a mix of European, Creole and Cajun culture reflected in the city's architecture, cuisine and music, New Orleans is the perfect place to end your Southern Comfort adventure. Maybe take a walk down rowdy Bourbon Street or wander through the former plantation area of the Garden District. In the evening, join the rest of the group for an included Crawfish Boil dinner.

It's time get amongst the sights and sounds of Jazz Fest. A single-day general admission ticket is included in the price of your trip, and today is the first day of the festival. With music scattered across 12 stages, this event is about so much more than jazz – you can also find gospel, Cajun, zydeco, blues, R&B, rock, funk, African, Latin, Caribbean and folk music, and there are usually a couple of big-name international guests as well. Aretha Franklin, Bob Dylan, Burning Spear and Youssou N’Dour are among those who have played here before, which gives a sense of the calibre – and diversity – of the talent. The line-up is usually announced in January. Needless to say, music isn't the only thing celebrated here – take the chance to sample delicious Southern cuisine and learn a thing or two about Louisiana’s rich cultural heritage while you're here.

Enjoy classic architecture, history, music and food on this adventure through the Southern states of the USA. Kick things off in Atlanta before heading to the historic cities of Savannah, Charleston and Asheville and the musical cities of Nashville and Memphis before finishing in New Orleans in time for Jazz Fest. See a variety of artists covering all kinds of genres from jazz to zydeco to blues, rock, African, and more. It's not just music either – Southern cuisine, crafts, folk heritage and native cultures all play a role in this action-packed, world-class event.

Prices listed are per person in Australian Dollars, based on twin occupancy, including all discounts unless otherwise stated. The offer is subject to availability at time of booking and shown on the lowest inside category available at the time. Fares are capacity controlled and are subject to change at any time without notice. Prices/Offers are correct as at 21 February 2020 and can be withdrawn without notice. Hotels may charge resort fees not included in this package, payable direct upon check in. Visas are not included. Payments made by credit card will incur a surcharge.